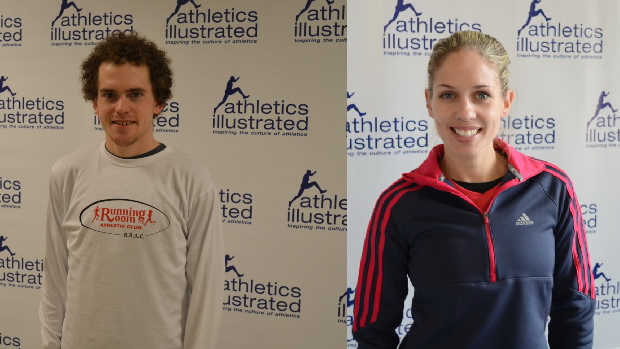 Clifford Childs of Victoria, BC and Natasha Fraser from Port Moody, BC (suburb of Vancouver) continue to run well in advance of their goals to qualify for international competition. Childs wants to compete at the International University Sport Federation Championships (FISU), that take place in Kazan, Russia in July 2013. Fraser is seeking the qualification standard for the IAAF World Track and Field Championships that take place in Moscow, Russia from August 10th to the 18th. In terms of performance, both took a step closer to their goals Sunday, April 21st at the Vancouver Sun Run.

Fraser defended her 2012 Sun Run title with a new personal best time of 32 minutes and 42 seconds. On Friday the 19th, she competed in the Mt. Sac Relays in Walnut, California finishing fourth overall in the 5000m Olympic Development race. Her time was 16:00.03 a new personal best at that distance. She finished ten seconds behind the winner. This performance did not give an indication of her Sun Run time that she ran two days later.

Fraser ran a controlled effort as she let a few of her competitors take the early pace out fast, “It went out pretty hard as I was back in fourth spot for the first km. I still split 3:03, so I wasn't worried that I was going too slow, they were just going really fast,” said Fraser.

Fraser gradually picked off each of the three girls in front of her to take over first place at around the six kilometre mark and maintained the lead for the final four kms. When asked how the race played out from her perspective, she said, “I ran kilometres three and four in third spot, about 20 metres back from Lindsey (Scherf) and Luci (Njeri). I caught Luci around three kilometres and then started gaining on Lindsay. By the five km mark I was right behind Lindsay. I made a move to pass her on the Burrard Street Bridge. When I hit the six kilometre mark I was feeling really good and pushed the pace a bit to make sure I got a gap. I just kept pushing and never looked back. The crowd was awesome - so many people cheering! It was really motivating.”

Childs finished as first Canadian and sixth overall with a new personal best time of 30:09. He is a former University of Victoria Vike, where he served as team captain. Childs primary goal is to qualify for the FISU championships. His Sun Run goals were aggressive, as he told Athletics Illustrated, “Going into the race my goal was to try executing my race plan, which was basically to run with the lead pack as a long as possible. I was thinking if put myself in the lead pack right from the gun I would have a good shot a top Canadian and maybe top three overall if I had a really good race. My thinking was that on a prefect day I could run 29:30ish.”

Asked to describe his race experience Childs said, “The race started out really slow. Going in, everyone was telling me that the first few kilometers would be really fast, but we went through the first kilometre in around three minutes and three kms in around 9:05 (30:16 pace). At three km, Kimugul made a pretty big move which myself along with (Willy) Kimosop, (Ian) Burrell and (Edwin) Kaitany matched. That fourth km was around 2:50. At four kms we hit the Burrard hill and I started falling back. At this point Donn Cabral and Kevin Friesen caught me. We stayed together until the top of the Bridge. Cabral then dropped me on the downhill and I dropped Friesen. I ended running the final four kms solo with a pretty comfortable lead over the next Canadian.”

Childs' next race is The Q's Victoria Run Series 5000m event at the May 11th meet in Victoria, BC.