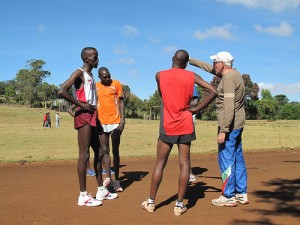 While distance running fans await for results and discuss the merits of the joining of America's current, fastest marathon runner and the World's currently most successful distance coach, I am going to have a little fun predicting the outcome.

Recently, American marathon runner Ryan Hall, announced that he will move forward to work with famed Italian distance coach Renato Canova. Will Ryan Hall achieve a breakthrough in the marathon by training under his new coach? Hall told Innovation for Endurance, “I have my own unique road that has had many exciting ups and heart-breaking downs, but one thing I know is that my journey is not over and the best is yet to come."

Hall owns an official marathon best time of 2:06:17, which he achieved at the 2008 Virgin London Marathon. He ran the distance as fast as 2:04:58 at the 2010 B.A.A. Boston Marathon. Boston does not officially count as a record, as the course runs point-to-point and the net drop in elevation is greater than 1m/1km. Hall's 2:04:58 was considered wind-aided. He has run the half-marathon distance as fast as 59:43, becoming the first North American to run under 60 minutes for the half-marathon.

Prediction: Ryan Hall will run to a new official personal best marathon time of 2:04:50 to 2:05:10 providing he chooses to run on a course that lends itself to fast, consistent pacing like London, Berlin, Rotterdam or Chicago, for example. This prediction includes the usual caveats of barring injury, having weather on his side and random acts of God.

I am predicting success because Hall will likely be stimulated in new ways, with Canova's new-to-Hall exacting and specific training program, that will likely provide benefits to him from his life-long base of stamina and by the anecdotal notion that because marathon opportunities can only happen once or twice per year, what are the chances that Hall has hit it exactly right on the day, so far?  Additionally, my assumption is that Hall is supremely motivated. To contact the current, most successful distance coach in the world, is an indication of a desire to do all he can to maximize his talents. 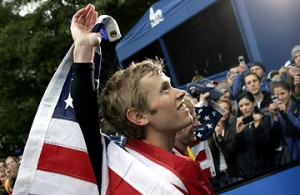 Canova has worked with some of the most successful distance runners. He has coached 3000m Steeplechase world record holder Saif Saeed Shaheen, 10,000 meter runner Nicholas Kemboi, who owns a personal best time of 26’30″03. He also coaches Dorcus Inzikuru, IAAF World Track and Field Champion in 3000m steeplechase Moses Mosop, who owns the world’s second fastest marathon time (not ratified as it was run during the Boston Marathon – 2:03:06).

Canova also coaches Florence Kiplagat, who is a two-time IAAF World Cross Country champion, Wilson Kiprop 10,000m best time (at altitude) 27’26, Silas Kiplagat, IAAF World Track and Field Silver Medallist, Sylvia Kibet who also earned a silver in the World Championships at the 5000m distance, Imane Merga, 2011 World Cross Country Champion and bronze medallist in the 10000m at the 2011 World Track and Field Championships, and Abel Kirui, 2011 World Marathon Champion. Canova has an unprecendented rate of success with primarily African-based athletes, who of course are endurance based athletes, just as Ryan Hall is. It is a well-documented fact that Hall started running good volumes at an early age.

Hall told Athletics Illustrated, “He obviously has an incredible amount of knowledge and wisdom from having coached so many amazing athletes.”

Canova said, “I received an email on the date of 25th of September from Ryan. In that email he asked me, very shortly, if I could be interested in working with him. I answered before taking any decision, I needed to know something more about him. I didn't speak about his career, that I knew very well, neither about his previous training. I was not interested in these particulars. I wanted to know something more about his motivation, his life, his relation with the faith, his objectives, his current physical conditions (not really good). After his reply, I explained  to him my training philosophy, very different from what he used before, and I proposed him to try some time, before taking a final decision if he was still interested in working with me, or no more.”

Canova told Athletics Illustrated in a May 2012 interview, “Kenyan and Ethiopian top runners are able to run the full marathon at a blood lactate level very much higher than European or American, so they have the ability to run with high lactate for long time. This depends on the quality of the athletes, but mainly on their new type of training, including many sessions of intervals over the traditional lactic threshold.”

Hall: “I also hope to learn from his unique training strategies that I find most compelling and different from the western way of arranging training."

Will Canova have Hall running a higher quantity of lactate threshold efforts and various intervals throughout the program? Once Hall is healthy it will be interesting to see what the changes in training will be. Regardless, he should be newly stimulated to provoke a better marathon result, at least once.

Hall will spend time in East Africa, under the watchful eye of Canova, “I am hoping to do more training in both Kenya and Ethiopia,” said the thirty-year--old. “I have always wanted to train out there and believe it will help me get to new levels of fitness.”

Canova: Before knowing exactly what he can do, of course I need to see him in training for a long period. Until now, I can only know from his reports about his feeling, and he can only know from my emails how to plan his training. When we can stay together for some time, he'll also better appreciate some training particular that at the moment I can't put in his training, because they are part of individual necessities and I can evaluate them due to direct knowledge only.”

Again, Hall's well-known history includes a lifetime of a good volume of mileage, which has led to some excellent international race results. There is no question that his aerobic endurance is as good or nearly as good as any marathon runner in the world. There is also little doubt that his dedication to the sport is deep as is his motivation to perform at a world-class level.