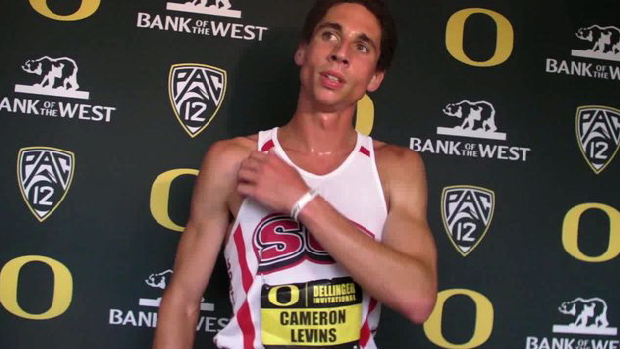 As has been widely reported, Cameron Levins has joined the Nike Oregon Project. After having won the NCAA 5,000m and 10,000m Championships while running for Division 1 Southern Utah University, then competing for Canada at the 2012 London Olympic Games in the 5,000m and 10,000m events, it appears that this is the next logical step for his running career.

Race Results Weekly reported that going-forward he will also be working with famed coach Alberto Salazar. Levins told Athletics Illustrated, “I knew very quickly that this is a program I wanted to be a part of, and that I could do very well training with such fantastic athletes.”

Levins was coached during his collegiate career by Southern Utah’s Eric Houle, after graduation he began to work with Speed River’s Dave Scott-Thomas. Having become engaged to his girlfriend Elizabeth Butler, the two began seeking the best educational opportunities for her area of study. She chose to attend school in Portland. “After we looked at Pharmacy school more seriously in the Portland area, it definitely spurred me to reach out to Alberto,” said Levins. “On another note, Dave Scott-Thomas is an incredible coach, but the training situation I was in before just was not ideal.”

Farah’s personal best is a British record 26:46.57 and Rupp’s is 26:48, which is an American record and the fastest at that distance for a non-African. The world record is 26:17.53 and is currently held by Kenenisa Bekele of Ethiopia. Bekele finished fourth overall at the London Olympic 10,000m race. He ran the distance in 27:32.44.

When asked about his potential shift down from his notoriously high mileage programme of 150 to 190 miles-per-week (243 to 307 kilometres-per-week), to a more quality-based programme he said, “I think it is necessary to look at other things than just mileage. I will still be running quite a lot, but strength training and speed work will be an important replacement to a little bit more weekly mileage.”

Looking forward, Levins has his sites on winning a medal in international competition. He is a three-time national cross-country champion in Canada and a two-time NCAA champion on the track. He said, “I truly just expect to keep improving. As long as I continue to get faster, then I'm still moving towards the ultimate goal of medalling at the World Championships and Olympics.”