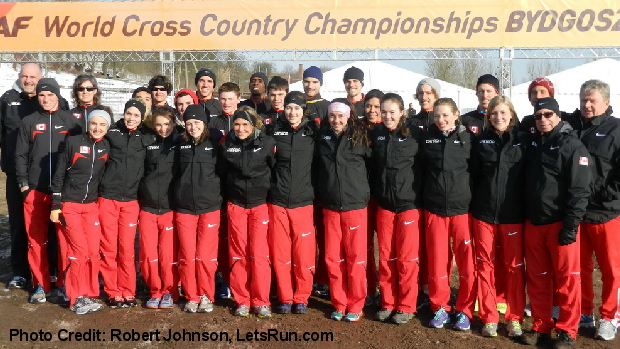 The junior women race six kilometres, while the junior men and senior women race 8k and the senior men go 12k. The four Canadian teams are made up of 23 athletes from across the country, which for the most part had to qualify by competing in the NACAC event January 26th in Mandeville, Jamaica.

The course is likely to have snow on the surface. Cameron Levins told Athletics Illustrated, “I haven't seen the course yet personally, but there has been a lot of snow at our training camp in Walcz, Poland. The pictures look like my kind of course though, and I'm excited to race in these conditions.”

Rachel Cliff said, “It’s been very snowy and cold the entire time we’ve been at the camp! I haven’t seen anything like this since I lived in Guelph, Ontario and it definitely makes training more challenging - you have to be adaptive. As Canadians, this weather is familiar territory for us.”

Cliff now lives in the snow-less city of Vancouver however, Kelly Wiebe of Regina is used to training in these conditions. “The conditions are much like they are at home in Saskatchewan; snowy, icy, cold with poor footing,” said Wiebe. “Other teams may see this as a disadvantage, but to me these conditions couldn't be any better. I think this can be said for a few athletes on our team, I know Cam thinks the same way. I have seen a few pictures of the race course and it looks like they are shovelling the running surface, but there is still going to be snow. I believe race day will be a balmy -3 degrees, perfect.”

Chris Winter said, “We are all confident that this type of weather only plays into our favour over the other warmer nations come Sunday.”

Team Canada traveled over 28 hours, which included a four hour layover followed by a sprint-to-the-departure-gate-moment in Munich, followed by a long bus ride that was purported to be only 90 minutes, but turned into four hours. When the teams arrived at camp, they were scheduled to do a shakeout run. The only problem was their luggage did not make it to camp with them. “This was interesting as over half of us did not have running gear or shoes. So we ran in "shifts". Levins had an extra pair of shoes that he lent to me for my run and then when I was done with them I passed them onto Luc Bruchet who then went for his shakeout. ...The outfits worn were interesting to say the least,” said Winter.

The Canadian’s fitness is rounding into form as a few athletes who have been battling sickness or injury are getting better. “From what I have seen the whole team seems in great shape, said Levins."Everyone will still need to go out and have strong performances, but I think we have the right group of guys to do very well.”

Natasha Fraser, who has had to miss recent road races due to illness, is starting to feel better. Whether her fitness is at the level that she has come to expect over the past year, we will only know on race day. She told Athletics Illustrated, “Despite my illness I know that I am still fit. If I can get my coughing calmed down by race day I am confident I can still have a good race. Maybe not the race I had hoped for last month, but I'll tough it out and run my hardest.”

Not only are the senior athletes that have qualified are fairly young, but they also possess international  experience. Levins, besides having competed in the Olympics finished a respectable 56th at the 2011 IAAF World Cross Country Championships that took place in Punta, Umbria. He was just twenty-two years of age. Ahmed, two years younger has competed in three World Cross Country Championships as well as two World Junior Track and Field Championships and the 2012 London Olympic Games. Winter has competed in two World Championships. “I was a part of two teams as a junior and I have learned a lot since then and I am looking forward to having a really positive experience out there this Sunday. I think I am in the best shape of my career and I am excited to take advantage of it,” said Winter.