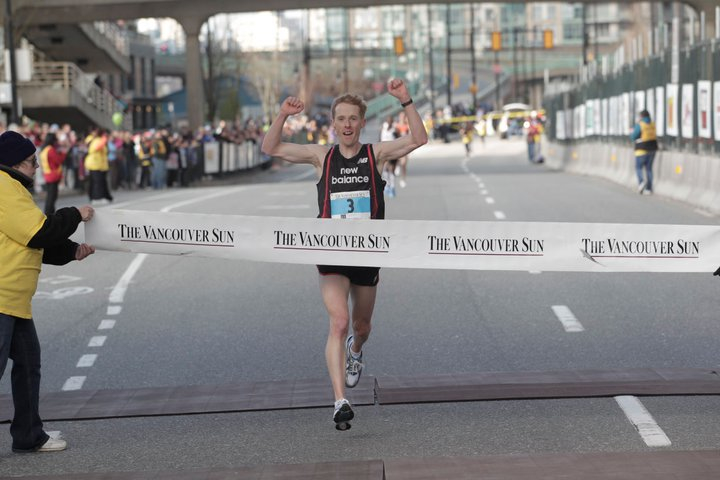 Eric Gillis from Antigonish, Nova Scotia, recently finished as top-Canadian and fourth place over-all at the Ottawa 10k with his finishing time of 29:11. The Ottawa 10k is run in conjunction with the Ottawa Marathon weekend. On May 9th, Gillis finished second to Kip Kangogo at the 50, 000 participant-strong, Vancouver Sun Run in 29:03 to Kangogo's 29:01.

He is coached by Dave Scott-Thomas (DST) who is the head coach at the University of Guelph. DST happens to coach several elite-level Canadian runners with Speed River track and field club.

The interview: (took place before the running of the Ottawa Marathon weekend)

Christopher Kelsall: You have indicated in your blog that Heidi and you share the same feeling about daytime naps; she must have earned them. Are you timing her across the crib yet? Has she a benchmark personal best to work off of?

Eric Gillis: She earns them by gaining 1/2 lb a week; I earn them for the exact opposite reason. Little Heidi hasn't found her legs quite yet; she gets her exercise with a lot of kicking and arm flailing.

CK: At the Vancouver Sun Run, Kip Kangogo just beat you with a good finish sprint. Where lies the difference between you and Kip finishing so close? Does he have a natural kick or is he just currently more fit? In another month would you have sharpened enough to take him?

EG: I'd have to give the natural leg speed to Kip with his faster 1500m PB and from the way he moved over the last kilometre I'd have to give him the edge in fitness. Maybe he'll be in Ottawa May 29 and we'll all see if I've sharpened enough to take him, I think so.

CK: So in Ottawa, you want to make him hurt early?

EG: I would prefer a faster early pace; Ottawa should be that kind of race.

CK: A 2:13 marathon is very solid, are you racing Simon Bairu to see who is going to take down Drayton's 2:10:09 Canadian record first or do you have a standard that you would rather chase?

EG: Drayton's record is in the back of my mind, but I'm not close enough yet to be looking at it seriously next trip out. For whatever reason it has held up for decades, it is about time for someone to take it down. I'll give it a go eventually, whether it's still 2:10:09 when I'm ready will be interesting to see.

CK: Now that it appears that Bairu is most likely doing New York for his marathon debut, do you think he will take down Drayton's record there?

EG: A 2:10 marathon debut would be quite the feat, that being said Bairu is rolling this year, his results at World XC and Payton Jordan were very impressive. If he can keep that momentum going into the marathon we might see Drayton's record go down. If not in New York I'm sure another time, I know Bairu has a sub 2:10 in the cards.

CK: Your marathon personal best 2:13:52 is roughly in-line with all your other pe

EG: If you judge my PB's off IAAF points 3k-1076, 5k-1080, 10k-1121, Marathon-1144 they do get better as the distance increases. I think this has lot to do a lot with DST's (Dave Scott Thomas) long-term development strategy for me. Simply put, build a big aerobic engine for running fast marathons. I also enjoy the longer stuff, which you have to when logging 200k weeks with hour tempos.

CK: Once you are into the higher mileage to build that big aerobic engine, what does your training week look like?

EG: Here is a random sample of my log from early December, I use flotrackr to record my mileage. I enter in kilometres and flotrack converts to miles, hense the decimals.

CK: 'Tempos' seem to mean different things to different people nowadays. Is tempo to you an anaerobic threshold or sub-AT run?

EG: I like the word tempo and use it loosely for any interval work 5 minutes and over, off track. Right now while training for 10ks a tempo run is within 3:05-3:20 min/km pace for 30- 50 min of work. The pace is set by perceived effort, which accounts for the variation in pace. A tempo run on a Friday after a hard Wednesday track sessions is obviously going to be slower than one done on a week without as intense workouts but the effort is going to be the same. During marathon training we use the word tempo less, it's replaced with 'marathon race pace'. Most of my longer session are near, at, or just under goal MRP.

CK: Are you going to attempt breaking the 28-minute barrier, soon or staying on a marathon plan?

EG: No, I'm done with the track for now. Maybe I'll go back to it if the urge to break that barrier becomes strong enough but at the moment I'm having a blast on the roads!

CK: So what are some of road goals that you are hoping to achieve in the near future?

EG: Continuous and consistent improvement upon the achievements I have already made on the road.

CK: Can you quantify 'continuous and consistent improvement' for me?

EG: Nope, it's a personal thing. As long as I have the drive to keep training at a high level I will, continuous and consistent improvement will happen as a by-product.

CK: How about events. Are there any specific events you are planning on racing in this spring - after the Ottawa 10k?

EG: Ottawa is it for the spring. I'll take a couple down weeks, just mileage and then get geared up for a marathon in the fall. Which one, I just about have confirmed, I'll let folks know via my blog when it becomes official.

CK: Regarding Blue Nose Marathon Race Director, Gerry Walsh, with his comment about not wanting to attract elite marathoners to the event because as he says, "they will damage the fabric of the event". What fabric and how do elite runners damage it?

EG: I am not sure exactly what Mr. Walsh meant by that comment you would have to ask him. I don't believe having elite marathoners would hurt the race. The Blue Nose is a popular race in the Maritimes and showcases the cities of Halifax and Dartmouth and I am all for supporting this race.

CK: Various first time Olympians have explained their time entering the stadium and getting on the track as surreal and being on the big stage as a very nervous moment. Can you take us through the process and how that felt in Beijing?

EG: Surreal is a good word for it. The Bird's Nest in Beijing is an incredible facility and I will certainly never forget entering the stadium. I think I learned a lot about racing on such a large stage in Beijing, although I did not achieve the result that I wanted it was an important step in my development as an elite runner.

CK: Was your performance not to your expectations due to nerves?

CK: Ok something happened. I am sure you are not a man of excuses, but readers can learn from your situation. Was it a combination of travel, nerves and the well-documented and perhaps exhausting appeal to make the Olympic team that influenced your result? How were your early splits?

EG: Learning how to handle all of the elements that come with competing in the Olympic Ga

mes and being able to put them aside or harness that energy into a good race is something that I feel comes with experience. Nothing dramatic happened to me at the Olympics, when it comes down to it I had a bad day on the track. As an athlete you are going to have those bad days. You have to learn how to reflect on the race, learn from it and then move on to new goals.

CK: Does your home in Antigonish (NS) offer up a good running environment?

EG: Sure does! Cross Country is big in junior high and high school and when so many run at a young age some are bound to continue on as they get older. Any good running town starts and ends with dedicated coaches, Antigonish has that! Bernie Chisholm is the God Father of coaching running in the Nish. He has over 50 provincial high shool XC tiles, numerous AUS tiles with St.F.X, and was key in the development of Olympian, Robyn Meagher and myself.

CK: I understand you grew up there. Were you active in various sports as a child?

EG: I participated in just about every sport there was in town growing up, excelled in none! That didn't matter though; I just loved sports and being part of the team. It was a few years after I started running, and when I had stopped most other organized sports that I realized running wasn't just something I liked, but I was actually good at it too. Yeah I enjoyed being active as a child; I had a lot of energy and sport (both organized and non-organized) were a good outlet for me. Being active has so many physical and mental health benefits for kids and adults alike. Most people know this it's just making it a part of your lifestyle that people struggle with.