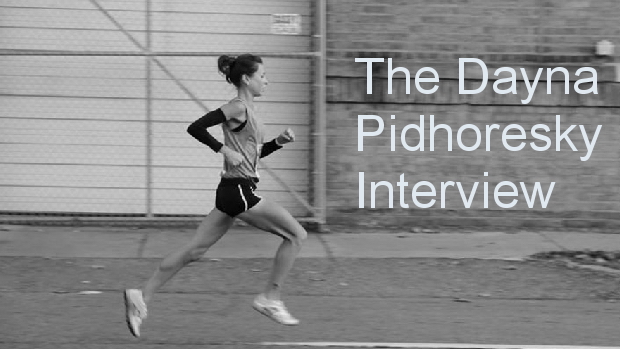 She arrived on the Canadian running scene in style with an impressive win at the 2010 Detroit Free Press International Half Marathon. Her winning time of 1:13:15 is one minute off Tara Quinn-Smith’s Canadian half-marathon record of 1:12:09.

Dayna, continued her good form recently winning 3 of 4 road races that she entered including the competitive Harry's Spring Run-Off 8k, Sporting Life Toronto 10k and the Around the Bay Road Race (30k). She is coached by Josh Seifarth.

Below we talk about each of these races and future running plans in a two-part interview, which take place before and after she raced the Canadian Half Marathon Championships in Montreal.

Christopher Kelsall: Nice result at Harry’s Spring Run-Off 8k. Can you take us through the race?

Dayna Pidhoresky: Thank you! Off the start I went out with Lucy (Lucy Njeri Muhami) at a pretty fast pace and then took control of the race at about 1K. Ideally, I wanted to put myself in a position to win without overextending my legs due to having just run Around the Bay six days before and the upcoming half-marathon champs. Thankfully my legs felt really strong towards the end and I was able to glance behind me and notice that my lead was sufficient enough to be able to ease up slightly and relax coming into the finish.

CK: At what age did you first discover that you are a runner?

DP: I was always really active as a child with soccer, gymnastics, and various other sports. I think it was in grade 5 that I decided to give cross-country a go when my teacher encouraged me to join the school team. Cross-country revealed my potential to run well over longer distances and it was what I continued to excel at most throughout high school and university. I knew that what I lacked in foot speed I made up for with endurance.

DP: Yes, I have always lived and trained around Windsor and I currently I live in Tecumseh.

CK: I understand that you are a big fan of the TV show, The Office. Can you believe that season 7 is the final season for Steve Carell?

DP: Haha, yes it is a great show and it’s certainly hard to imagine that it will continue to exist without Michael (Carell's character). I think it’ll be interesting to see how it all plays out without him in the cast.

CK: Who is your favourite character?

DP: That’s a tough one . . . I would have to say Dwight. He just cracks me up with his endless eccentricities. The constant banter between Jim and Dwight is always entertaining and some of my favourites are when Dwight lies in wait for Jim inside the snowman, when Jim forwards all Dwight’s calls to his headset, or when Jim puts all Dwight’s stuff in the vending machine. So funny!

CK: Do you live vicariously through Jim’s mischief making ways? Are you a mischief maker?

DP: Yes, I am a mischief maker through and through. I’ll leave it at that:)

CK: Last year, at the Detroit Free Press International Half Marathon you surprised yourself finishing in 1:13, you went in hoping for a 1:15. In a post-race interview you indicated that you were worried about the early pace. What will be your tactic for the champs? Win or is time more of a priority?

DP: The win is definitely my priority for Half Marathon Champs. That said, I think that given my fitness and the field that has been assembled, I wouldn’t be surprised if the record went down in the process. Half Marathon Champs have been my priority since Detroit and all of my training and racing so far has focused on performing well on April 17th. Also, to set a new personal best, and most importantly to finish knowing I have raced to my full potential. To be able to check all of these off at the end of the day would be satisfying.

CK: What sort of personal best? Are you looking to go sub-1:13 or for a more specific time?

DP: I plan on feeling out the early part of the race. I want to see how the first half plays out and respond accordingly. Time-wise I will say that I would like to run around 1:11. In Detroit we went through the first 10K in close to that pace. It was a bit fast for me then but I believe I am in a better position now to maintain that pace over the full 21.1K. All signs indicate that I am running

DP: A fall 2011 marathon is not in the plans. Spring 2012 is the earliest I would consider debuting a marathon.

CK: Is that decision to do with plans on being more ready for the marathon or do you have other specific shorter distance goals to achieve before that?

DP: Both in a sense . . . I believe I am relatively young in terms of long-distance running and I don’t think I am fully capable of handling the demands of the training that is necessary to run <2:30. It seems that anything over 2:29:55 is not worth much in Canada so I would rather wait until I actually have a fighting chance. For now we are focusing on the shorter distances until I have fully adapted to that type of training load. Then we will move forward. Each block of training makes me more tolerant of increased training stress and also improves on my ability to recover well. Furthermore, the training that I am doing now, even though it is geared toward other race distances, is necessary for my marathon performance in the future. I believe that patience is a good thing to have!

CK: So have you trained differently or increased your training that caused you to feel strong towards the end of races like at Harry's Spring Run-Off 8k?

DP: I believe that a runner’s training needs to be constantly adjusted and tweaked over time. In order for my body to continue to improve and elicit a response I need to increase the stimulus. Throughout the winter I worked toward building up my mileage, intensity, and workout length. I think the noticeable increase in strength that I am feeling now can be attributed to any combination of these things.

CK: What level of volume did you get up to during winter training?

DP: In a pure mileage sense, my highest volume weeks were at 137K and a large portion of my training volume is often very specific in regards to pace, rest, and interval length.

CK: Your half-marathon in Montreal was slower than what you wanted (1:15:04). What was the difference on the day at the Scotiabank Half-Marathon Championships compared to the Harry's Spring Run Off 8k?

DP: Scotiabank was much slower than I was hoping for because of the weather conditions. It was extremely windy and going into the race I knew that it was not going to be a day to run a fast time. I was also in a bad position for the last half of the race in which I was fighting the wind on my own after losing contact with a small group.

CK: More recently you ran the Sporting Life 10k in Toronto, finishing in 33:01. Can you also take us through this race? This was a personal best, yes?

DP: Yes, that was a personal best for me. Sporting Life 10K was a really enjoyable race for me. I went into it feeling very relaxed, a far cry from two weeks prior in Montreal where I felt more pressure to perform. I tried to push hard the whole race because I know sometimes I tend to hold back a bit if there's no one beside me. It was hard to tell where I was at during the race in regards to pace because I did not see many kilometre markers but when I heard there was less than 2K to go I picked it up into the finish. I still felt like I had a lot left at the end but I was pleased with my time and how I felt throughout the race.