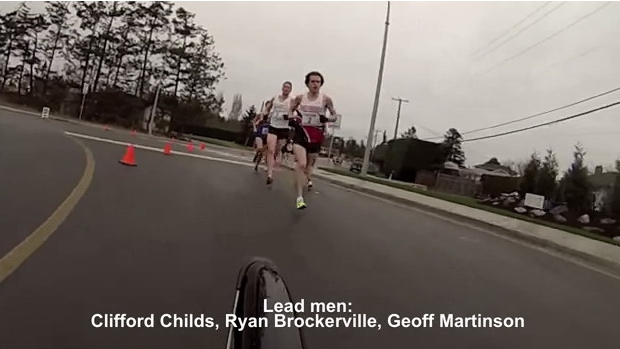 The fastest event of the 2013 Vancouver Island Race Series, the Synergy Health Management Bazan Bay 5k road race is happening this Sunday, March 10th in Sidney, BC (approximately 20 kilometres north of Victoria). The course is flat, fast and provides the potential for very good results. Because of the nature of the flat and straight course the field, as usual, will be competitive.

The favourite in the men’s division is Goeff Martinson of Victoria, BC. He is looking to defend his win from 2012, where he set the new course and all-time event record in the time of 14:20, where he was not challenged. This year may be different.

The 2013 event, will include stiff competition for Ryan Brockerville of Vancouver, “I’m just looking forward to a great race. It seems like there are a few fast guys involved,” said the Simon Fraser University student. “I am going for a ride and hopefully have something left to battle it out at the end.”

Some of those fast names include three-time Olympian Simon Whitfield, Kevin Friesen, Dylan Gant, Ryan Huff and Mark Willkie, who look to make the race interesting. Friesen has run as fast as 14:11.54 on the track, as well as 31:08 on the road for 10k. Gant’s personal best is 31:27. While Point Grey Track and Field Club teammates Huff has run the 3000msc as fast as 8:24.42, while Willkie is a middle-distance specialist (800m/1500m) and looks to have a strong race.  Whitfield, Olympic gold and silver medallist won the race in 2007 in the time of 14:36. Other top competitors may include former University of Victoria Vike Clifford Childs and current Vike Doug Oxland.

There will be a few athletes from the locally-based National Triathlon Centre, one of those athletes is Andrew McCartney, who will compete with the top runners. McCartney ran to the time of exactly 15:00 during the 2012 event, he has been improving each year. Sean Chester of the Prairie Inn Harriers looks to run sub-15, Sunday. Chester owns a 10,000m personal best time of 31:12.

The women’s event, is anyone’s race as favourite Natasha Fraser, who has been running lifetime personal bests and setting course records during the 2012 cross-country and 2013 road seasons, is not competing due to illness and will rest so she will be ready to compete in the 38th IAAF World Cross Country Championships, which take place in Bydgoszcz, Poland on March 28th.

Sabrina Wilkie, who finished second to Fraser during the Pioneer 8k race in January is now the race favourite. She owns a 5000m personal best time of 17:11 and is favoured to better that at the Bazan race. Her 28:15 time from the Pioneer 8k is a performance equivalent to 17:05. Other top-level competitors are, Jen Millar who has been running well as of late, so has Melissa Ross of Parksville, Erin Burrett of Nanaimo and Claire Morgan of Victoria, BC. Masters, should they decide to toe-the-line are Marilyn Arsenault and Lucy Smith will look to compete with Wilkie for the open win.

In the men’s masters race Vancouver’s Kevin O’Connor will attempt to challenge Jim Finlayson who is running well as of late with his 25:10 8k performance at the Pioneer 8k in January 2013, they will lead the way for the over-40 group. Battling for third position will be Craig Odermatt and two-time Olympian Bruce Deacon, both of Victoria.

The Synergy Health Management Bazan Bay 5k is included in two series, the Vancouver Island Race Series as well as the Timex BC Road Race Series.

This article will be updated until Saturday, March 9th.